A recent meta-analysis says saliva is more sensitive than nasal swabs in the diagnosis of asymptomatic and mild COVID-19 infection.

The result of the analysis, posted on an online peer-reviewed journal, Nature, by a team of researchers at the National University of Singapore, suggests that saliva is, at best, slightly less sensitive or similar to other specimens, including nasopharyngeal swabs.

The study further disclosed that considering the three primary modes of transmission of SARS-Cov-2 such as contact, droplet and aerosol routes, various types of samples have been suggested for the purpose of detection.

In Singapore and several other countries, nasopharyngeal swabs are the principal means for collecting specimens for testing.

However, the collection procedure for nasopharyngeal swabs can cause discomfort and require trained healthcare staff to perform.

According to the lead researcher, Alvin Kuo Jing Teo, saliva and self-administered nasal swabs are, in many ways, ideal specimens for COVID-19 screening and can both be collected safely without the need for trained staff

“We aimed to test the sensitivity of naso-oropharyngeal saliva and self administered nasal swab compared to nasopharyngeal swab for COVID-19 testing in a large cohort of migrant workers in Singapore.

“We also tested the utility of next-generation sequencing for diagnosis of COVID-19. Saliva, nasopharyngeal and self-administered nasal swabs were collected from subjects who presented with acute respiratory infection, their asymptomatic roommates, and prior confirmed cases who were undergoing isolation at a community care facility in June 2020,” he said.

Continuing, he disclosed that 91 and 46 of the 200 participants were tested twice and thrice respectively, adding that 62.0 percent, 44.5 percent, and 37.7 percent of saliva, nasopharyngeal and self-administered nasal samples returned positive. 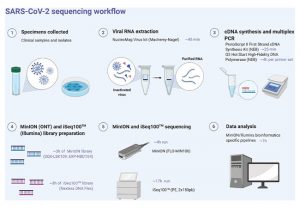 “The percentage of test-positive saliva was higher than NP and SN swabs. We found a strong correlation between viral genome coverage by next-generation sequencing and cycle threshold values for SARS-CoV-2.

“We found saliva to be a sensitive and viable sample for COVID-19 diagnosis,” he stressed.

The scientist noted that the meta-analysis which was approved by the director of Medical Services, Ministry of Health, under Singapore’s Infectious Disease Act in the event of a major outbreak, was deemed to be of significant public health benefit to the country.

Reacting to the meta-analysis, a senior medical laboratory scientist and researcher at the Federal Medical Centre, Ebute Metta, Lagos, Saheed Adekola, told PUNCH HealthWise that he was not surprised by the report.

Quoting from statistics from the Journal of American Medical Association (JAMA) on coronavirus testing positivity rates, Adekola noted that there are eight specimen deployed for such diagnosis.

Bronchoalveolar lavage is a diagnostic method of the lower respiratory system in which an instrument is passed through the mouth or nose into an appropriate airway in the lungs, with a measured amount of fluid introduced and then collected for examination.

Fibro bronchoscope brush biopsy, on the other hand, is a procedure in which cells are taken from the inside of the airways that lead to the lungs.

The medical lab scientist remarked that a debate often arise as to which is better between nasal and pharyngeal swabs.

“It has been concluded that nasal swabs is the better of the two for unadmitted patients because it will detect two-third of cases while pharyngeal swabs can diagnose only one-third of same case,” he said.

He reiterated that research had long established that saliva is most sensitive but cumbersome in collections (because it requires large volume) and extraction of DNA/RNA for PCR.

“Presently in Nigeria, we are collecting nasopharyngeal swabs because it is easier to collect and sensitive to COVID-19 diagnosis,” he said.