As demands for Ivermectin skyrocketed in the last few weeks following report of new studies indicating it could be effective in treating COVID-19, health experts say Nigerians need to be careful about the indiscriminate use of the drug. ADEBAYO FOLORUNSHO-FRANCIS reports

Owners of pharmaceutical retail outlets say the cost of Ivermectin has soared in the last two months, following an unusual rise in demand for the drug.

They said that the high demand for the drug may have been spurred by studies and reports claiming that it was effective in the treatment of COVID-19.

Ivermectin is a medication used to treat many types of parasitic infestations, such as head lice. It has also been used widely in sub-Saharan Africa since the 1990s to treat river blindness.

According to recent findings, however, the COVID-19 pandemic has prompted a surge in demand for the drug globally.  Health experts are, however, urging caution against the misuse of the medication, noting that its abuse can have a serious health effect.

Speaking with PUNCH HealthWise on the possibility of Ivermectin abuse by Nigerians engaging in self-medication, a clinical pharmacist, Dr. Kingsley Amibor said he is indeed worried about the indiscriminate use of the drug.

He said that long-time misuse of medications like Ivermectin can have a damaging effect.

“For instance, adverse effects such as dizziness, headache, somnolence, vertigo, tremor, encephalopathy and neurological challenges have been reported with the use of Ivermectin. Seizures have also been reported during the post-marketing experience,” he said.

According to Amibor, the serious neurological events in humans, such as encephalopathy, stupor or coma were earlier reported in African countries during campaigns to treat Onchocerca volvulus.

The World Health Organisation describes Onchocerciasis, commonly known as “river blindness”, as a disease caused by the parasitic, worm Onchocerca volvulus. It is transmitted to humans through exposure to repeated bites of infected blackflies of the genus Simulium.

The consultant hospital pharmacist called for proper health education on social media platforms, radio and television, as well as print media, noting that many people make decisions about their health based on information they get from social and regular media platforms.

“The populace must be informed and warned against indiscriminate use of Ivermectin in suspected cases of COVID-19. 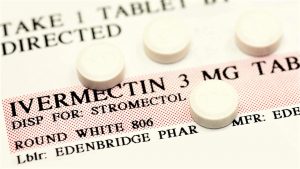 “Yes everyone wants to stay alive. Certainly, nobody wants to die from COVID-19 infection, but indiscriminate or random use of Ivermectin is not the way to go. People must be encouraged to follow the laid down protocol for COVID-19 testing and other control measures,” he said.

Proffering solution to the challenge of Ivermectin misuse, the National Chairman of the Association of Community Pharmacists of Nigeria, Dr. Samuel Adekola, disclosed that his group is currently trying to map out a strategy with the National Agency for Food and Drug Administration and Control.

“What we can also do at this stage is to guard against abuse. Right now, there is no standardised or accurate dosing for Ivermectin in the management of COVID-19 because it was not designed ab initio for that purpose.

“Another thing we are doing as a professional body in conjunction with NAFDAC is to look at how to put the drug under control before it becomes open to faking. The process will also ensure there is price standardisation,” he said.

He expressed fear that if the situation is not quickly arrested, it could degenerate into hoarding and price gouging, as witnessed in the case of hand sanitisers and face masks, starting at the height of the COVID-19 pandemic last year.

He disclosed that ivermectin is presently produced in Europe.

“We cannot manufacture it here in Nigeria, unless the active pharmaceutical ingredient is easily accessible and Ivermectin is officially approved for COVID-19 management,” he said.

Recent findings by PUNCH HealthWise revealed that the cost of the medication has increased considerably, as many local pharmacies told our correspondent that it is now more profitable to sell in bits than in packs.

The pharmacy attendants said Nigerians are probably buying the drug to treat COVID-19.

The pharmacy attendants who also confirmed that they have recorded a boom in the sale of Ivermectin lately, however, maintained that the hike in the price of the drug was as a result of its global demand.

While virtually every pharmacy retails a tablet of Ivermectin for N100; only Vanguard Pharmacy in Ibadan agreed to sell at N70 per tablet.

According to the Business Head of Vanguard Pharmacy, Mrs. Osho Adedoyin, the pharmacy sometimes receive calls requesting for bulk purchase of Ivermectin outside the country.

“It is not just limited to Nigerians alone. We do get calls from abroad too from time to time. I must confess that the demands have increased by over 100 per cent because the frequency, as well as the quantity bought, has increased dramatically.

“It is not unusual these days to see patients either showing up in our pharmacies or making such demand via calls. As I earlier said, we are about one of few pharmacies still retailing it at N70 per tablet. Recall that this particular brand was sold for N5 each a couple of months ago,” she said.

She revealed further that Ivermectin is now repackaged in bottles of 500 tablets, as against the conventional packs of 12 to 20 tablets.

“The old sachet has not been available for a while now,” she said.

Management of COVID-19 a big deal

The recent PUNCH HealthWise findings did not come as a surprise though.

Earlier at a webinar held by the Lagos chapter of Clinical Pharmacists Association of Nigeria on Saturday, Managing Director of Victory Drugs, Festac Town, Dr. Folashade Lawal, disclosed that management of COVID-19 has become a big deal.

“A big deal because COVID-19 is still a novel disease, hence the numerous suggestions, trials and misinformation flying around. There was a time when the recommendation was hydroxychloroquine and some other drugs. Things change rapidly because knowledge keeps evolving about the disease and its management. Even the clinical practice guidelines keep getting reviewed at every evidenced-based recommendation.

“For those of us in community pharmacy, this has been a very challenging period. Many people out there have heard that Ivermectin might be a saviour, kind of. Now, everybody wants to take Ivermectin.

“Every day, we get a lot of calls requesting it. Some people are ready to buy a pack of 500 tablets to go and share as if they are groundnuts or sweets. I can’t blame them because the world is in a desperate situation. We should remember that Ivermectin is not for regular use and be wary of its long term use. These are grey areas that appear frightening to me. Today, even those who claim they don’t believe in COVID-19 are equally asking to buy this same Ivermectin,” she said.

Director-General of Nigerian Institute of Medical Research, Prof. Babatunde Salako was also convinced that the ‘rush’ for the medication may be connected to recent studies across the world including Nigeria, showing the efficacy of the drug against coronavirus.

“There is hardly anything you can’t buy over the counter in Nigeria, especially in this age of social media. Once you are given a prescription, you pass it to the other person who in turn recommends it to another person. In the end, you end up having more than one treatment protocol everywhere.

“It is like what happened when we started using chloroquine, which was relatively cheap. Later, it became very costly and people were alarmed. At a point, we couldn’t even find it to buy again in the market,” he said.

Ivermectin going the way of chloroquine

He expressed worry that the Ivermectin may gradually be heading in the same direction as chloroquine.

“For me, I am not sure we have seen the drug to cure the virus. Whatever drug science has suggested should be put through a trial. Until we have one, we probably will be jumping from one drug to another,” he said.

On why the world finds it hard adopting Ivermectin for COVID-19 treatment, the NIMR director noted that there was no fast rule about it.

“If you go to a physician and he doesn’t see why you should take it, he is not going to prescribe it for you. But here in Nigeria, some patients may insist on it. They will even go to any length including the open drug market where they will get the drug to buy,” he said.

The National Chairman of Clinical Pharmacists Association of Nigeria, Dr. Joseph Madu, however, said there was no conspiracy theory surrounding the use of Ivermectin.

“I don’t think the world is downplaying its efficacy. It can be likened to the treatment of malaria where you have several drugs. The physician or prescriber is in a better position to decide which one would serve the purpose. Some people react to drugs differently. A drug may work in one patient and fail in the other,” he said.

“I understand it was banned at some point because it wasn’t a very common drug then. Its name is just coming up again because of COVID-19. For now, a vaccine is the best option for COVID-19,” he said.

Is ivermectin an OTC medication?

When asked if the medication should be classified as over-the-counter or prescription-based medicine, the clinical pharmacist explained that it was difficult to place the position of Ivermectin in the country.

“The truth is that we find it hard categorising Ivermectin either as prescription-based medicine or over-the-counter drug.

“In 2004, the former NAFDAC DG, Late Prof. Dora Akunyili was mandated to classify all the drugs in Nigeria. But she couldn’t meet up with it. Most of these drugs have no classes. It is just like what is happening outside the country. In some countries, Ivermectin is classified as OTC. In some others, it is a prescription drug.

“Here in Nigeria, we find it hard to place it in either of the two. For instance, we know all antimalarials fall into the category of OTC,” he said.

Madu also said the government should be doing better with the control of pharmaceutical distribution and sales.

“The Federal Government is not serious about managing pharmaceuticals in this country. Almost everybody has access to them.

“Even when you order that only qualified pharmacists should be allowed to handle prescription medicines, what about the ones in the open drug markets like Kano, Kaduna, Onitsha and Idumota? In those markets, they don’t give a hoot about prescriptions.

“The drug retailing business is also not exclusively controlled by pharmacists. In the entire pharmaceutical markets, pharmacists are controlling only 40 per cent of the market. This is the bane of leadership we are talking about,” he said.