In the visual thalamus, neurons are in contact with both eyes but respond to only one

Memory helps us evaluate situations on the fly, not just recall the past

WHO expects Guinea to announce end of Ebola outbreak

Twenty-three-year-old Olalekan Faleye, a survivor of the shooting that attended the peaceful #ENDSARS protest at Lekki Toll Gate in Lagos, says he has become an amputee after the gunshot injuries he sustained to the leg on Tuesday, October 20, 2020.

He had undergone surgical amputation of his bullet-ridden right leg.

The shooting incident had attracted national and international outcry, with the Lagos State and Federal governments being urged to unravel the identity of the shooters and who deployed them.

Speaking exclusively with PUNCH HealthWise a few days after he was discharged from the National Orthopaedic Hospital, Igbobi, Lagos, Olalekan said until the Lekki shooting, he had temporarily worked as a labourer with a construction company in Ikoyi to raise money for his ‘freedom’ as an apprentice cobbler.

He also planned to use whatever was left after his freedom ceremony to rent a shop where he could carry out his cobbler trade.

“Any time we had little or nothing to do at the construction site, I would join the #ENDSARS protesters at Lekki Toll Gate to demonstrate against Police brutality and bad governance.

“I recalled attending the protest on three different occasions (October 15, 16 and 17) before the soldiers’ invasion on October 20,” he said.

Looking pale and sad, he struggled to recollect the incident of the Black Tuesday, saying the whole episode still feels like a bad dream.

“They (soldiers) arrived in a group and, without warning, started shooting at us. As people ran helter-skelter, I recalled hearing the protest coordinators screaming, ‘Don’t panic, sit on the floor together and keep waving the Nigerian flag.’

“But it was too late. People panicked when they saw the soldiers advancing and shooting at us.

“In the panic that ensued, I was hit on the right leg by a stray bullet. The force of the shot was so intense that I found myself on the ground, writhing in pain and with so much blood gushing out of my leg.

“I was there for some seconds, feeling weak and fatigued, before some fellow protesters came to my rescue. I was held by both hands and legs as they continued running while also dodging the flying bullets,” he said.

Olalekan disclosed that after his bullet-riddled leg was tied up with what looked like a shirt, he was rushed along with three other victims of the shooting to Vedic Hospital in Lekki.

“At Vedic, I was denied admission when the medical official saw the state of my bloodied leg,” he alleged.

The 23-year-old said he kept getting weaker as he was being conveyed by the rescue team in search of another hospital.

“That was how I ended up at Grandville Trauma Centre. After examining the leg, one of the doctors who attended to me announced that my limb was in a sorry state because the high-velocity projectile forcefully pierced through the muscles and blood vessels in my leg from one end before coming out at the other end.

“Consequently, I was asked to drop the contact of my parent or guardian because of the complex nature of my case,” he said.

Olalekan’s medical statement, which was written on Grandville’s letterhead and secured by our correspondent, states, “To whom it may concern, OLALEKAN FALEYE MALE/23 years. The above-named patient presented to our facility four days ago (20/10/2020) around 23.28pm due to a gunshot injury to his (R) leg in about 2 hours after the incident.

“He sustained this injury as a result of his involvement in the #ENDSARS protest that occurred at the Lekki toll gate.

“He was initially taken to Vedic Hospital and then brought in here for further management.

“On presentation, GCS 15/15 O2 Sat; 98% pain and severe bleeding from the gunshot site with a point of entry and exit of the bullet. He was unable to lift his leg and move his toes.

“Diagnosis made was (i) leg injury from gunshot (ii) imminent compartment syndrome.”
The medical paper which was signed by a certain Dr. Adebayo and countersigned by Dr. Umukoro further reads, “An exploratory fasciotomy was done on the right lower limb to litigate severed blood vessels. Five units of packed RBCs were transfused over the course of admission as the patient came in with Hb of 5.6g/cll. No pulse (dorsal pedis, tibia post and ant. Arteries) was felt.

“Patients relatives have been counselled on the need for an amputation of the patient’s leg but they would need a second opinion. For further clarifications and enquiries, kindly call the hospital.”

Experts say a fasciotomy or fasciectomy is a surgical limb-saving procedure when used to treat acute compartment syndrome.

After four days of admission at Grandville Trauma Centre, the patient was given a referral letter to a federal teaching hospital in Lagos for intensive treatment.
“My admission request at the teaching hospital was rejected by the management over inadequate bed space. They, however, recommended a private amenity ward within the same facility.

“When we got there, the officials said I could only be admitted if my people made a down payment of N50,000. Consequently, my mother had to secure an ambulance that took me down to the National Orthopaedic Hospital, Igbobi, Lagos,” he said.

“Before then, I recalled hearing the doctor at Grandville saying that my leg might likely be operated. That was the same comment I received again on the day the ambulance brought me to Igbobi. My mother screamed ‘God forbid!’

“I was completely dejected. I kept looking at the affected leg, wondering if that would be the last time I would see it. However, I braced up myself and signed the consent form against the will of my mother. It was like a death sentence and I feel it would forever remain the worst decision of my life,” he added.

PUNCH HealthWise visited NOHIL on Wednesday, and requested to speak with the medical director of the hospital, Dr. Mustapha Alimi; but he was said to have travelled out of Lagos for a conference.

Further attempt to see the facility spokesperson, Mrs. Ayo Adenike, also proved futile as she was also not available.

However, one of the consultant surgeons on duty agreed to speak with our correspondent on condition of anonymity.

“I think I have a pretty good idea of the patient you are talking about now. That particular boy presented late,” the surgeon began.

Continuing, he said, “Let me tell you how it works. When a patient sustains a gunshot injury either to the upper or lower limb (arm or thigh) and it ruptures the major blood vessels, it will distort the flow of blood from reaching down.

“When this happens, such a person must be rushed quickly to the hospital for immediate surgery. If this is not done on time, such a limb cannot be salvaged.

“Two things are involved. First, it is about the extent of the injury. Secondly, it is also about the duration between the injury and patient presentation to the hospital.”

The surgeon said it was not a matter of just wheeling anybody into the theatre for surgical amputation because he received bullet wounds to any of the limbs.

“No, I can tell you that here in our facility at Igbobi, we have several patients with gunshot wounds who still have their arms and lower limbs intact.

“There are still people going about their normal lives with pellets lodged somewhere in their body. Because they look like small beads, people won’t know they are there unless you tell them.

“However, pellets are more injurious at close range. They are not like the usual bullets from police rifles that can be fired from long range. Those are high-velocity missiles that can even be shot from 500 metres,” he emphasised.

A family’s many challenges

Back home at her one-room apartment in Alimosho Local Government of Lagos when PUNCH HealthWise visited, Olalekan’s mother, Mrs. Temitayo Faleye, struggled to put up a smile and gently roused her son from sleep. 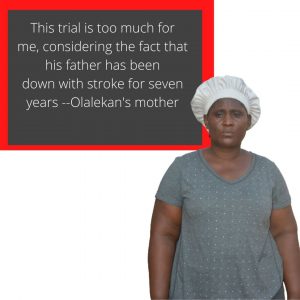 A popular noodle seller in the community, Mrs. Faleye told our correspondent that she sensed something was wrong with her son on the night he was shot.

“I was feeling uncomfortable throughout the night. At a point, I had to rouse myself from sleep to pray against perceived evil or demonic attack. It was shortly after the supplication that I received a call that Lekan had been shot at the toll gate and hospitalised somewhere in Lekki.

“At first, I feared he had probably died and that people were not willing to tell me. I headed to the health facility around midnight just to be sure he was still alive. That was the first time I would be in Lekki in my entire life,” she said.

The woman said she almost fainted when she was presented with a bill of N 206,000 at Igbobi.

She protested that her son was a survivor of the #ENDSARS protest and shouldn’t have to pay for his treatment.

“The medical team didn’t believe me and wanted to know why he didn’t present early at the facility that fateful night or the day after. It wasn’t until they saw the Grandville’s medical record that they agreed to reduce the bill. That was in addition to some injectable and pints of blood donation that we secured.

She said the crutches currently being used by her son was donated by some sympathetic workers at Igbobi.

When asked how she was coping with the challenges of having to bathe, feed and cater for her son all over again, Mrs. Faleye broke into tears.

“This trial is too much for me, considering the fact that his father has been down with stroke for seven years.

“Sometimes, I spend as much as N15,000 on transport fare to convey him [her husband] from Alimosho to Igbobi or Island General Hospital for check-up and back again.

“Worse still, my son has never remained the same ever since he lost his right limb. Olalekan has become miserable and temperamental. He won’t talk to anybody and prefers staying indoor.

“Imagine somebody who used to love running around, playing football and attending to his shoe cobbling business now confined in one place. Of course, I understand his frustration. He is no longer a happy man,” she said.

She lamented that the October 20 tragedy could, perhaps, have been averted if she had worked harder to raise enough money to pay for her son’s ‘freedom’ and secure a shop for him.

She said the 23-year-old was adept at making shoes, belts, bags and leather sandals and had dreamt of starting his own shoemaking company someday.

Copyright PUNCH
All rights reserved. This material, and other digital content on this website, may not be reproduced, published, broadcast, rewritten or redistributed in whole or in part without prior express written permission from PUNCH.
Contact: health_wise@punchng.com

The post My leg was amputated after I was shot at Lekki Toll Gate —23-year-old cobbler appeared first on Healthwise.

Scientists reveal regions of the brain where serotonin promotes patience