Raising money for heart surgery a nightmare, parents of children with hole in the heart lament

Masculine traits linked to better parenting for some dads

Raising money for heart surgery a nightmare, parents of children with hole in the heart lament

For most parents of children born with a hole in the heart (atrial septal defect), the greatest frustration is raising the required funds for corrective surgery to save the children. Some of the parents share their emotional stories of struggling to raise millions of naira to save their children. ADEBAYO FOLORUNHSO-FRANCIS reports.

When a civil servant with the Lagos State government, Wahab Abidemi Alao, received a distress call in 2020 that his nine-year-old daughter, Alimat, had fainted in school, he had no idea that it could be something serious.

On seeing the head teacher, Alao was told that Alimat had been rushed to Massey Street Children’s Hospital.

According to Alao, the family was completely unprepared for the health challenge of their daughter.

“When we got to the health facility, nobody prepared us for what would follow, as the management of the hospital insisted on running series of tests to diagnose the cause of her respiratory challenge.

“It was through the result of the tests that we discovered she had a hole in the heart. We were subsequently referred to Lagos University Teaching Hospital, where we have been managing the condition since last year,” he said.

According to the United States Centres for Disease Control and Prevention, atrial septal defect is a congenital heart condition that occurs when there is a hole in the wall that divides the upper chambers (atria) of the heart.

The CDC stated that a hole can vary in size and may close on its own or may require surgery.

Before the diagnosis, Mr. Alao disclosed that young Alimat’sappetite for food had dropped drastically and she was always complaining of feeling weak. 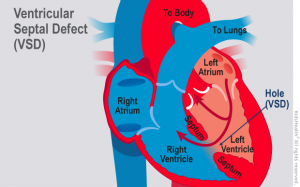 When PUNCH HealthWise visited the Ward E3 children section at Lagos University Teaching Hospital to see how the girl was faring, the depressed father told our correspondent that her case was a complex one.

“We initially thought the heart defect was something that can be corrected here but we have been told that Alimat will have to be flown to India to see a team of specialists for surgery,” he said.

Quest to raise N8m for surgery

The civil servant said he was told to raise about N8million for the surgery.

“We were practically running from pillar to post, seeking financial assistance.

“When you add that amount to the cost of the flight, passports, and other travelling logistics, we will be looking at well over N10 million.

“But since we have not fully raised the money, we had to keep bringing her frequently to the hospital for routine check-up and treatment,” he stated.

According to Alao, while Alimat’s respiratory function seemed to have improved, her appetite keeps dropping.

He disclosed that it is quite clear to him that the surgery is a must as soon as possible, noting that he has secured all the necessary documentation required by the Indian High Commission for visa processing.

In an emotion-laden voice, Alao told our correspondent that young Alimathad lost her mum, who was hypertensive, six months ago.

“It was because of this same problem that IyaAlimat became hypertensive and we lost her. Unfortunately, she did not wait to see her dream of seeing Alimat access the treatment in India,” he bemoaned.

“It is always hard to tell people that I have spent millions on Alimat since her ailment started last year. I am yet to even finish paying the loan I collected,” he said.

The father also revealed that ever since her predicament began, Alimat has not returned to school.

“But we made an arrangement for private coaching for her at home,” he told our correspondent.

Mr. Wilson Ovie, an Information Technology specialist, had a similar experience in 2012.

His four-year-old son, who had been diagnosed with the same heart defect at the Lagos State University Teaching Hospital, needed about N5 million.

“We were referred to a hospital in India for corrective surgery. It was a terrible experience for me and my entire family.

“He lost weight considerably and cried a lot. Anybody seeing him for the first time would think he had kwashiorkor. It was an experience parent shouldn’t be made to pass through,” he said.

However, unlike the case of Alao, Ovie was lucky to get help from unexpected quarters.

He disclosed that being a church worker, he was able to raise the N5 million from parishes and some well-meaning Nigerians.

Ovie told our correspondent that it was an experience he would never forget in a hurry.

Speaking with PUNCH HealthWise, a paediatric cardiologist at the Federal Medical Centre, Asaba, Dr. Ifeoma Nwafor, told our correspondent that cases of babies born with holes in the heart were becoming frequent, even though it may be difficult to come up with statistics on the increasing incidence.

“From what I’ve experienced since 2016 to date, I can tell you that for every 10 children scanned for the condition, eight have a congenital heart defect. The last I checked, I had scanned 358 before I travelled recently.

“Out of this number, about 300 have a congenital heart defect. Sadly, about 115 of them are late now,” she said.

According to the Centres for Disease Control and Prevention, congenital heart disease is the most commonly diagnosed congenital disorder in newborns. The incidence and mortality vary worldwide but have been relatively high in developing countries in Africa and Asia.

The CDC stated that congenital heart disease is one of the most frequently diagnosed congenital disorders, afflicting approximately 0.8 per cent to 1.2 per cent of live births worldwide.

Congenital heart defect not caused by a single factor

Dr. Nwafor confirmed that congenital heart defect cannot be tied down to one definite predisposing factor.

“But there are things we look out for. If you are diabetic, it predisposes the baby to a congenital heart defect.

“If a mother has an infection like rubella during pregnancy, it also predisposes a child to a heart defect. Other ones are thyroid issue, alcohol consumption, antimalarial medicine in early pregnancy, and herbal concoctions,” she said.

Nwafor noted that, aside from being hereditary, a hole in the heart is also linked to Down syndrome.

“It is common in women who give birth from age 35 and above. They tend to deliver kids with Down syndrome, the majority of whom develop holes in the heart.

“Ordinarily, this defect is something that can be diagnosed during pregnancy but we are not doing foetal echocardiogram in Africa. I think it has a lot to do with the equipment and facility.

“Most centres are now beginning to have echo machines,but it is very expensive to get one. In my centre, the only one we were using broke down. It is taking them a long time to buy one to replace it because the cost is in the range of N28m,” she revealed.

According to the cardiologist, some cases often go undetected,but as the child ages, the effect begins to weigh in.

She added that some kids may not tolerate exercise like other children.

“You see them get tired easily when other kids are running fast. In most cases, you find most of these babies with defect breathing unusually fast. If they beat that fast, you just suspect that they have a heart defect.

“There are some other things we look out for, such as “murmur”. It is a close examination of the heart. It is what could make us decide to run a scan on the child,” she said.

Scanning for a heart defect an expensive venture

Although Nwafor admitted that an echo scan is expensive, she reiterated that there are still some tertiary hospitals, such as theObafemiAwolowo University Teaching Hospitals Complex in Ile-Ife, that offer their services at an affordable rate.

“Around here (Asaba), it is a bit expensive. But in Ife, it is cheap. I think it is offered at N8,000 per patient. I understand it is heavily subsidised. But now that we have a new echo machine at FMC Asaba, we will consider a new price regime. It used to be N5,000 before the machine packed up. But for a machine that costs us about N28m, I don’t think we can still run it for N5,000,” she said.

The cardiologist however conceded that correcting congenital heart defect in the country does not come cheap.

She noted that before the outbreak of COVID-19, the simplest corrective heart surgery in the country cost N1.5 million.

“Now, I am sure it should be in the range of N2 million. But for the complex ones, the minimum costyou can get around is from N3.5 million.. I am sure the child I sent to Ife paid more because there were few complications along the line. And the child had to stay longer in the hospital.

“That is why many children whose parents cannot afford the surgery die. Even the Kanu Heart Foundation that many indigent people used to frequent is currently overwhelmed.

As a way to enhance early detection, she recommended that every child should be made to undergo a scan after delivery.

Another cardiologist working at Federal Medical Centre, Abuja, Dr. OlugbengaAbiodun, says if someone has a hole in the upper chamber, they may live throughout life without discovering it.

Abiodun also stated that if a hole is small and occurs in the muscular part of the ventricle, it may close on its own as the person grows.

“In this part of the world, where many mothers put to bed in trado-medical homes, for instance, when the matron or whoever is in charge fails to diagnose the defect, it can become a problem for the child later in life.

“The good thing is that a lot of these surgeries can now be done within the country,” he said.

On the chances of post-surgery survival, the cardiologist said that if it was minor heart surgery, the patient would be up and running by the second day.

“Generally, I will say the results we have been getting concerning these surgeries are good,” he said.

He, however, identified late presentation and non-adherence to doctor’s prescription, among others, as the main reasons for some recorded fatalities.

The post Raising money for heart surgery a nightmare, parents of children with hole in the heart lament appeared first on Healthwise.

Of mice and men and their different tolerance to pathogens

Of mice and men and their different tolerance to pathogens