Less than 2% of global COVID-19 vaccines administered in Africa

Toward a reliable oral treatment for sickle cell disease

Experts in reproductive health have blamed the low prevalence of cesarean section delivery in the country on lack of access and poor understanding of the benefits of obstetric surgery by many women who need the intervention.

The country, they said, must prioritise expanding access to cesarean delivery as it could help reduce the high rate of maternal mortality and perinatal morbidity and mortality.

Caesarean section is a life-saving obstetric surgery. It is sometimes the only available option for delivery in high-risk pregnancies such as those with breech presentations, obstructed labour, multiple/large fetuses, and in women with transmissible infections like HIV/AIDS. 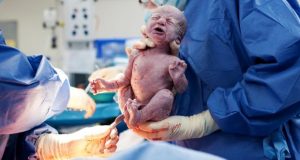 According to a population-based cross-sectional study published by BMJ – an open access online journal, the national prevalence of CS delivery in Nigeria is about 2.1 per cent. According to the study, this indicates the under-utilisation of the service in the country.

The study, published in 2019 and titled, ‘Cesarean delivery in Nigeria: prevalence and associated factors’ covered a total of 31, 171 most recent live deliveries for women aged 15–49 years (mother-child pair) in the five years preceding the 2013 Nigeria Demographic Health Survey Data.

It noted that available evidence about the population-based prevalence of CS in Nigeria reveals a threshold that is far below the 10 per cent recommended by the WHO.

Speaking with PUNCH HealthWise in an interview, a senior Obstetrician and Gynaecologist at the Federal Medical Centre, Ebute-Metta, Dr. James Taiwo Odofin, said the causes of unmet needs of caesarean delivery in Nigeria are multi-factorial

He said while the about two per cent quoted for Nigeria is rather too small for caesarean delivery nationally, he is aware that the percentage of CS is up to 50 per cent in tertiary centres where patients are referred to, while many centres with comprehensive emergency obstetric care also record up to 50 per cent in CS delivery.

Odofin, however, noted that there are general aversion and fear of surgery, including CS, by Nigerians and Africans.

“There are myths associated with caesarean delivery as the women who deliver by this method are considered as not being ‘woman enough’ or ‘weak’.

“That’s why the pregnant women with this erroneous belief may want to deliver by all means vaginally, even if such is not safe or possible.

“Religion also tends to subtly discourage pregnant women from CS and openly promote vaginal delivery, as if it is the only means, hence women disregard their doctor’s recommendation for CS to their peril in some cases

“Lack of medical personnel who can perform emergency CS safely and successfully in some remote health facilities (public or private) is also a factor.

“Poor access to health facility, either due to delay in taking such decision in the face of obstetric emergency that will require CS or delayed transportation to a health facility will equally reduce the cumulative number of CS done.

“Lack or poor antenatal care attendance, where pregnancy can be monitored, and mode of delivery planned equally have an effect on the ‘low prevalence’ of caesarean delivery as some pregnant women who might otherwise have benefited from scheduled CS will end up with traumatic or even ‘impossible mission’ of vaginal delivery with subsequent death of the baby and or mother,” he said.

The gynaecologist, however, noted that expanding access to CS and encouraging women to accept it whenever they need it are crucial to improving Nigeria’s maternal and neonatal health indices.

“The caesarean delivery will definitely reduce the high rate of maternal mortality and perinatal morbidity and or mortality.

“CS is generally safe especially if performed by the skilled medical personnel.

“The public should be educated on its benefits and its significance in saving the lives of mothers and their babies.

“The government should equally empower women to be socioeconomically independent to take certain life-saving decisions, without referring to the source of funds.

“Government should also make sure the NHIS covers everyone, especially all the pregnant women, instead of ‘out of pocket’ mode of accessing healthcare.

“Religious bodies should equally educate their follower not to see CS as ‘not of God’, while every health facility should have a skilled medical personnel who can safely perform CS within the shortest notice,” he said.

Dr. Odofin explained that there are two broad indications for CS, some of which are common in Nigeria.

“The first is maternal. Some of the indications for maternal include having previous CS, inadequate pelvis, maternal medical conditions, antepartum haemorrhage, prolonged pregnancy and failed induction of labour.

“The second major indication for CS is foetal factors. These include suspected foetal distress, antepartum foetal compromise, multiple gestations, foetal macrosomia (big baby), abnormal lie and presentation of the baby, cord prolapse, among others,” he said.

The study, a secondary analysis of the nationally-representative 2013 Nigeria Demographic and Health Survey data, noted that when medically indicated, CS has the potential for reducing maternal neonatal mortalities and morbidities, including delivery complications such as obstetric fistula.

It, however, stated that there has been no significant increase in the population-based CS rates for several years in the country.

“The considerably low population-based prevalence of CS in Nigeria suggests unmet needs which may contribute to poor maternal and neonatal outcomes in the country. Consistent with this premise, Nigeria currently accounts for the highest absolute number of maternal mortality and the second-highest number of neonatal mortality in the world,” the study stated.

Also speaking with PUNCH HealthWise, a reproductive health and family planning specialist, Dr. Habeeb Salami said the availability of experts in the villages away from the city is a major reason the national prevalence for CS could be low, noting that in major hospitals in the city, the procedural is sometimes as high as 50 per cent.

“There are medical indications for CS, which are sometimes the only option.

“For instance, when you have obstructed, especially when the baby is very big, it is an indication for CS. It is also one of the commonest reasons for CS in Nigeria. This is because underage marriage is still encouraged in many parts of the country, particularly in the villages.

“Yet, the availability of experts that can handle CS in these villages is a big challenge. More than half of doctors and nurses in Nigeria are in the city

“We, therefore, need to focus on how we can motivate experts to work in these places where this service is needed.

“We need to strengthen our healthcare system in the villages and rural areas to ensure those who need this service get it.

“We don’t have a challenge of access to CS in the cities. Many of the teaching and general hospitals in the city provide this service almost daily and so they will have high figures.

“But the low figure recorded in the villages will surely bring down the figure for the country.

“There are some general hospitals in the villages that have just one doctor who may not be able to attend to all those who need care. So we need to address the challenge of inadequate number of experts in the villages,” he said.

Dr. Salami, who is a programme manager with Pathfinder International, however, noted that more efforts should be devoted to reducing the need for CS, as well as ensuring there is no need for emergency CS.

“For instance, if we have proper antenatal services in these villages and it is observed that the baby is big, the physician will already know that the woman may not be able to deliver vaginally.

“Therefore, a proper plan can be put in place ahead of the delivery to ensure delivery through CS, instead of having an emergency and looking for where to do the CS. So, antenatal is very crucial,” he said.

According to WHO, when caesarean section rates rise towards 10 per cent across a population, the number of maternal and newborn deaths decreases.

The global health agency, however, stressed that when the rates exceed 10 per cent, there is no evidence that mortality rates improve.

“Across a population, the effects of caesarean section rates on maternal and newborn outcomes, such as stillbirths or morbidities like birth asphyxia, are still unknown and more research on the impact of caesarean section on women’s psychological and social well-being is needed,” WHO said.

WHO also stated that medical practitioners should not undertake caesarean sections purely to meet a given target or rate, but rather focus on the needs of patients.

All rights reserved. This material, and other digital content on this website, may not be reproduced, published, broadcast, rewritten or redistributed in whole or in part without prior express written permission from PUNCH.
Contact: health_wise@punchng.com