Why the world might soon need a new COVID-19 vaccine

Rude behavior at work not an epidemic, new study shows

When did the first COVID-19 case arise?

Why the world might soon need a new COVID-19 vaccine

Scientists at the Redeemer’s University of Nigeria say if COVID-19 mutates into a new strain of virus, it could require the development of a new vaccine.

They made this conclusion after they had identified the B.1.1.7 variant of the coronavirus in Nigeria.

In an online publication on Monday, the researchers said they had found that the same variant lineage B.1.1.7 currently identified in the United Kingdom, had existed in Osun State, Nigeria, since August 3, 2020 when they first collected patients’ samples.

They had also collected another sample, also from Osun State, in October that showed the presence of this new variant.

Lead scientist and Professor of Molecular Biology and Genomics at RUN, Christian Happi, said of the new variant, “The B.1.1.7 lineage we found in Nigeria, predating the one described in the UK, has also been observed to rise rapidly in the UK over the past four weeks, indicating the plausible increased spread of the virus by specific non-synonymous mutations in the spike protein.”

He, however said there was no sufficient evidence to indicate that the B.1.1.7 lineage contributes to increased transmission of the virus in Nigeria

The report, published in The Conversation, a copyright-free news channel, discussed the implications of a mutation in SARS-CoV-2, with the researchers noting that such could confer an advantage on the virus.

Ify Aniebo, said to be a contributor to the work, was also involved in the study.

The researchers are of the African Centre of Excellence for the Genomics of Infectious Diseases at the RUN’s Ede campus.

They worked in collaboration with the Nigeria Centre for Disease Control and had reported 24 additional genome sequences of the COVID-19 from Nigeria.

A related study was also published online in peer-reviewed Journal of Virological Methods.

Discussing the implications of COVID-19 mutation, the RUN researchers said, “For instance, a virus with an advantageous mutation could affect humans more readily, thereby spreading more easily between people; it could be less recognised by the immune system, or more pathogenic [causing disease].

“If a mutation occurs in the region of the virus that was used to develop the vaccine, the vaccine will not be as effective. This is what happens in the case of flu vaccines because the virus keeps mutating into a new strain.”

As of the time they made their findings public last September 6, the scientists had warned, “We do not know much about SARS-CoV-2 yet. And we don’t know if the virus will mutate into a new strain down the line.

“If it does happen, it could require the development of a new vaccine.”

Based on reports coming from the United Kingdom since last week, the scientists’ fear seemed to have been confirmed, as the UK has reported a more virulent strain of COVID-19, with the potential to infect by 70 percent.

The B.1.1.7 variant of the COVID-19, thought to be a mutation associated with higher transmission and pathogenicity, is the latest scourge in the United Kingdom and has made the British government to declare another lockdown to check its spread.

A handful of countries have also banned flights from the UK in order to prevent its importation into their countries.

Discussing their findings in The Conversation, Happi said globally, there is only one strain of SARS-CoV-2, which is also the same as the strain circulating in Nigeria, noting, however, that there are more than 1,000 lineages of this novel virus in circulation around the world. 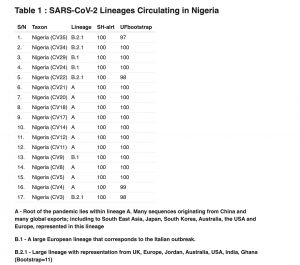 While identifying the root of the pandemic, the researchers said many sequences originating from China and many global exports — including to South East Asia, Japan, South Korea, Australia, the USA and Europe — are represented in this lineage

More crucially, the researchers said the B.1 strain of COVID-19 was of a large European lineage that corresponds to the Italian outbreak.

They added that the B.2.1 strain was of a large lineage with representation from the UK, Europe, Jordan, Australia, USA, India, and Ghana.

Talking about their findings, the scientists said, “We investigated the presence of the globally spread spike protein mutation D614G which has steadily increased temporally in Europe, East coast of the United States, South America, Africa and some parts of Asia, and found four Nigerian patients infected with the Spike D614G mutant virus.”

Continuing, they said, “Three of these patients presented with very severe disease.

“This mutation has been associated with higher transmission and pathogenicity, and also helps the virus to evade immune interventions as it dominates the wild type whenever it is introduced into a new location.”

Speaking about the UK COVID-19 strain in the House of Commons last week, Britain’s Secretary of Health, Matt Hancock, said the new variant of coronavirus might be associated with the faster spread in the south-east of England.

British Prime Minister, Boris Johnson, also said the new strain of coronavirus could be “up to 70 per cent more transmissible” than the earlier one.

Again, on Monday, a lady, Jenny Dissents, on Twitter @StilettoKitten alleged that the new strain of COVID-19 in the UK had blinded her brother.

The RUN scientists, however, noted that, “The lineages identified in Nigeria are not different from the ones identified in other parts of the world and there are no reports of strains or lineages unique to Nigeria thus far.”

How couples can solve lighting disagreements for good

How couples can solve lighting disagreements for good