There’s a bright side to being a ‘Debbie Downer’

Stressed teens benefit from coping online, but a little goes a long way

Twenty-three-year-old amputee, Chimezie Stanley Nnatah, says losing his right leg to a stray bullet fired by operatives attached to the Alade Police Station, Shomolu, Lagos, in the wake of the protests that followed Lekki toll gate shooting of October 20, is a recurring nightmare that he is struggling with.

He says he was hit by by stray bullet on October 21.

Incidentally, Alade Station was among the 20 Police precincts and posts razed by suspected hoodlums who hijacked the #ENDSARS protest last October.

When PUNCH HealthWise paid him a visit at the National Orthopaedic Hospital, Igbobi, Lagos, the young construction worker was seen leaning on a crutch outside the J Ward of the Federal Government-owned facility.

Having survived two successive surgeries during which he was transfused with 17 pints of blood, Chimezie seems to be adjusting to the reality of his new life.

He had spent six weeks on admission at Igbobi.

“I was returning from work on October 21, 2020 when I ran into armed policemen from Alade Station. They were shooting intermittently to disperse people in the wake of the #ENDSARS protest that followed the Lekki toll gate shooting,’ he narrates.

According to him, the shooting incident took place around the Alade Market in Shomolu, not far from the bus stop. 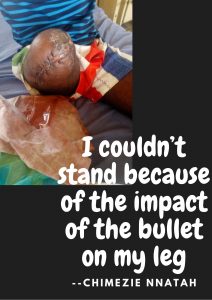 Recall that security agents had shot at #ENDSARS protesters at the Lekki toll gate on Tuesday, October 20, leading to yet-to-be ascertained number of casualties.

The shooting incident had also attracted national and international outcry, with the Lagos State and Federal governments being urged to unravel the identity of the shooters and who deployed them.

Chimezie says he was confused at first, and wondered what could be chasing the people scampering for cover around him.

“But I got the message when I started hearing the repeated sound of gunshots not too far from where I was. I didn’t know whether to run left or right in the midst of the pandemonium,” he says.

Despite all his efforts to avoid being caught in the crossfire, the construction worker says he was hit by a stray bullet.

He says the shot came from one of the plain-clothes security operatives among the rampaging policemen.

“I couldn’t stand because of the impact of the shot to my leg, not far from my knee. But I managed to take cover under a shed while battling the pain. 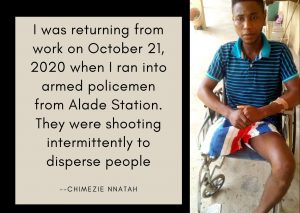 “After some minutes, the policemen, including the operative who shot me, passed by without taking a second look at where I laid on the ground.

“It was after they had left that some sympathisers came to my rescue and brought me to Igbobi hospital. I must have laid on that ground for about 30 minutes before help finally arrived.

“I didn’t witness all the activities because I passed out. I woke up later to discover strange faces and people in bandages all around me. It was then that the incident of the last couple of hours flashed through my mind.

“When my aunt, Ijeoma Nwali, came to the hospital later, I overheard one of the doctors telling her that I had lost so much blood and would require immediate blood transfusion,” he says.

He also disclosed that so many other gunshots victims were brought to Igbobi hospital from Shomolu and several parts of Lagos.

“The hospital was full of patients that day (October 21). Some even came with casualties and were banging the hospital gate. But they were not let in because of bed space. I was probably lucky because they brought me on time,” he said.

He expressed appreciation to his boss and co-workers who had visited him at his J Ward of Igbobi where he was admitted.

“Even the 17 pints of blood used so far is not enough. My aunt was told I still need about four more pints,” he said.

When asked if Chimezie was exempted from paying hospital charges in line with the Lagos State Governor Babajide Sanwo-Olu’s promise of free treatment for all #ENDSARS gunshot victims, the patent’s aunt, Ijeoma, said the family had so far spent over N400,000 on their relation.

“We were exempted from paying on the first day. But immediately Stanley [Chimezie] was moved to J Ward after the surgery on October 22, it has been payment of bill after bills.

“I still have the entire receipts here with me. We had paid for his surgery, drugs, wound dressings, bed space, cotton wool, plaster, toiletries and everything else. Since he was placed on water, we had to keep buying bottles of water for him too.

Narrating the agony of Chimezie’s family, Ijeoma said the news of his amputation “did not go down well,” especially with his father back home in Abia State. 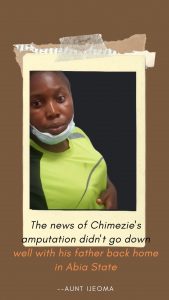 “Even his uncle living in Port Harcourt was bothered when they first heard of the unpalatable report.

“They blamed him for choosing to hustle in Lagos instead of staying with his uncle in Port Harcourt.

“But, as I told them, we had no choice than to sign the consent form because Stanley lost so much blood and the affected leg had swollen up. We just couldn’t bear him passing through so much pain.

“He used to be a very huge and bubbly fellow. Seeing him in this frail condition brings me misery. Sometimes, he wakes up at night and announces that he wants to take a stroll outside the hospital’s ward.” 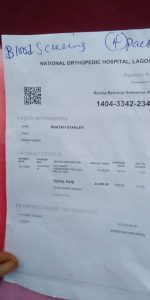 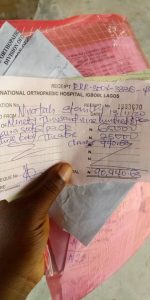 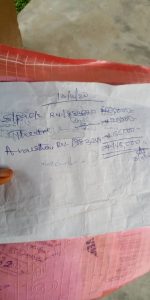 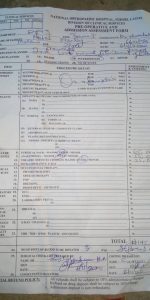 When asked if she has made attempt to bring the issue to the attention of the Lagos State Judicial Panel of Inquiry and Restitution for Victims of SARS and Related Abuses, she said officials of the Office of the Public Defender were aware of Chimezie Stanley Nnatah’s case.

She said officials from Office of the Public Defender visited Chimezie at the hospital about a week after the incident.

“We got in touch with them through somebody. They visited Stanley here in the ward to speak with him, but we have not heard anything from them again.

“I chatted with the lady again last week. She said they were still at the judicial panel and that there was no update for now. Meanwhile, we are trying to secure him a place to stay and buy him a prosthetic leg. Measuring his leg and procurement of the prosthetic leg is the priority for now,” Ijeoma said.

She expressed concerns about issues bordering on Igbobi officials’ attitude towards money paid for blood.

“There is a worrisome trend I noticed here. When patients pay money for blood screening, if the donor fails to turn up or fails to donate, patients are never given a refund.

“Yet, when patients eventually get a donor and the screening of the blood doesn’t turn out well, they will be required to pay for another screening.

“For instance, only two of the initial seven pints of blood we screened for Stanley were good. There were two other occasions that the donors didn’t turn up after I had made payment.

“The good thing is that we have not owed the hospital any dime. God has been helping us through.

“I am also grateful to some of Stanley’s colleagues and friends. They trooped out en masse to donate for him. We managed to raise 11 pints of successfully screened blood while several other ones were rejected during the screening,” she noted.

When our correspondent called the National Orthopaedic Hospital, Igbobi, to get clarification on the issue, the medical director of the hospital, Dr. Mustapha Alimi, responded via an sms stating that the claim wasn’t true.

“It is not true, Sir,” Alimi had texted.

Meanwhile a nurse in the ward who mistook our correspondent for Chimezie’s relative reassured that the patient would be alright once he gets a prosthetic leg.

“I seriously felt for him because he lost too much blood. Once he is fit, he will need to go through a second surgery.

“Once the wound heals and the leg starts taking shape, he can start wearing prosthetic. You people too should talk to your patient to calm his frayed nerve,” she said.

The health worker also disclosed that Chimezie suffers from phantom limb pain from time to time.

“All hope is not lost yet. Too much thinking and anxiety won’t change anything.

“There is what we call ‘phantom pain’ which tends to give one the feeling that the amputated leg is still there. It usually takes long before such pain leaves a patient,” she stated.

An online site belonging to the United States Amputee Coalition described phantom limb pain as ongoing painful sensations that seem to be coming from the part of the limb that is no longer there.

“The limb is gone, but the pain is real. The onset of this pain most often occurs soon after surgery. It can feel like a variety of things, such as burning, twisting, itching or pressure. It is often felt in fingers or toes. It is believed that nearly 80 per cent of the amputee population worldwide has experienced this kind of pain.

“The length of time this pain lasts differs from person to person. It can last from seconds to minutes, to hours, to days. For most people, PLP diminishes in both frequency and duration during the first six months, but many continue to experience some level of these sensations for years.

“People are often reluctant to tell anyone that they are experiencing PLP or phantom limb sensations, for fear that they will be considered “crazy.”